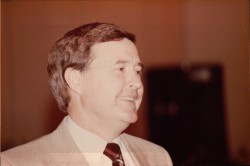 Charles Raymond Coil (Dec 11, 1929 – Dec 1, 1994), a leading evangelist among churches of Christ, served as president of Southeastern College of the Bible (soon renamed International Bible College) from 1971 to 1989.

Coil preached regularly in Knobel, Arkansas; La Porte, Indiana; Florence, Alabama; El Dorado, Arkansas; and West Memphis, Arkansas before moving back to Florence, Alabama in 1965 to begin full-time work in gospel meetings. In 1967, Coil preached a gospel meeting with the Golf Course Road Church of Christ in Midland, Texas. At the meeting in Midland, 339 responded to the invitation, including 86 who were baptized. Many believe this is the largest number of responses in history at a gospel meeting associated with the churches of Christ in the United States.

In the fall of 1970, the reorganized board of directors of Southeastern College of the Bible approached Coil to ask him to consider taking the college’s presidency. Coil never considered himself as college president “material.” In fact, he said:

I gave the group the names of highly qualified men for their consideration. The group asked me to reconsider after the men I had recommended all pled that they had other obligations. I asked for time to think and pray. The group told me that if I did not accept they would sell the property and give the receipts to an established Christian college. IBC was a dream that I was willing to make reality. So I accepted; no one else would take the job.

Undoubtedly, the Lord’s providence worked in the selection of Charles Coil, because the Lord used him to take the University to great heights – increased enrollment, a highly qualified faculty, and workshops that edified the entire brotherhood.

President Coil announced that the Board of Directors on August 24, 1971, had reorganized the institution International Bible College, noting that “the aim of the college is to train men and women to be workers for the Lord and develop an international view.” While the school now bears a different name, Coil’s international vision remains at the core of Heritage Christian University.

In the early days of the University, the business office often had difficulty meeting the payroll. Coil’s character is revealed in his instruction to his bookkeeper to pay everyone else on payday before she paid him.

Coil faced great health difficulties with determination and faith. On July 1, 1989, he underwent a nephrectomy following the discovery of a malignant tumor.  Coil suffered a heart attack on July 29, 1991, and underwent triple bypass surgery shortly after.

Charles Coil left this life to be with the Lord on December 1, 1994. Dennis Jones wrote: “[Coil] was beloved by the staff and students here, reared a fine family with his wife Maye, and touched more lives than many of us ever will. His influence reached around the world, and it wasn’t unusual for people to speak about how their lives were positively influenced by brother Coil. His wisdom and gentlemanly spirit will be sorely missed by all of us here. Brother Coil was a dreamer. He dreamed of a better day for the Lord’s church. He dreamed of the day when the call would come that the gospel had been preached to every person.”

Harold Taylor and Basil Overton officiated Coil’s funeral on December 3, 1994 in the HCU chapel. Old friends Jimmy Moffett, Marlin Ivey, and Jimmy Allen spoke about their departed friend. Coil personally selected the hymns for congregational singing. He believed these selections “represented[ed] the gospel [he] tried to preach.” The hymns were: “All Hail the Power”; “I Walk With the King”; “I Stand Amazed”; “Tell Me the Old, Old Story”; “Amazing Grace”; “I Believe in the One They Call Jesus”; and “Lead On, O King Eternal.”

Coil was laid to rest in a mausoleum in the Mt. Zion Church of Christ Cemetery, Florence, Alabama.